In the Supreme Ruler series, nuclear weapons are a very powerful type of missile which does a notable amount of damage to facilities, units, and population. Nuclear weapons become available upon research of the "Nuclear Weapons Production" technology, and like other missile units, must be researched individually before being built in the Missile Fabrication facility. This missile type requires large quantities of time, money, and Uranium to fabricate, and it's use results in a large negative impact on both Domestic Approval Rating and international relations, so care should be taken when making the decision to use nuclear weapons. 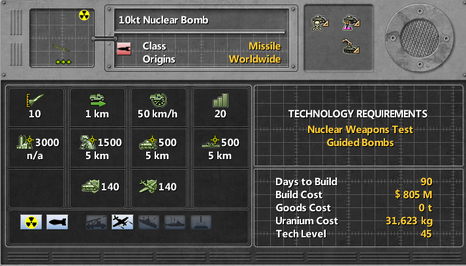 Technical Readout of the 10kt Nuclear Bomb, one of the first nuclear weapons available.

As stated above, nuclear weapons have qualities which make them extremely attractive to those intending to be able to inflict massive damage on enemy units and facilities. In particular, the Fortification Attack, Soft Target Attack, and Hard Target Attack attributes, which typically exceed 1000. Nuclear Weapons are divided into two categories, Tactical and Strategic. Tactical Nuclear Weapons are usually used on a unit (or a cluster of units), and the units which are damaged by the blast are usually either severely damaged or destroyed, making nuclear weapons very viable for use against particularly difficult enemy formations. Strategic Nuclear Weapons are designed to be used against enemy facilities or cities, usually for the purpose of damaging the productive capacity or the manpower of the nation.

Nuclear weapons are the central goal of the "Race for the Bomb" Technology Race. After "Nuclear Weapons Production" is researched, it becomes possible to build nuclear weapons. However, the Unit Designs made available by the technology are very basic and do low damage in comparison to the nuclear weapons developed as the technology tree fills out more, so further research must be done past the Era Technology to achieve nuclear bombs with higher attack values and speeds.

Nuclear weapon use can be allowed or disallowed at game start. Under the Military Settings options menu, there are two options which relate to the use and effects of nuclear weapons. "Allow Nuclear Weapons" specifies whether nuclear weapons can be built or used in-game. Disabling this option bars any country from building or using nuclear weapons. "Nuclear Weapon Penalties" refers to the backlash by your populace and the international community due to nuclear weapons use, and can be adjusted to Low, Medium, and High.

Location of the Nuclear Weapons Permissions button under the Military-Production tab.

Nuclear weapons can be used in a number of different situations and by five types of platforms. 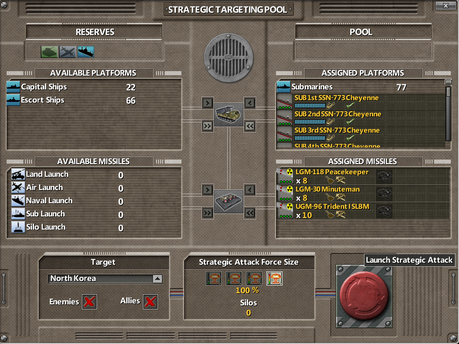 The Strategic Targeting Pool provides the player a way to systematically use their nuclear weapons to destroy a nation's infrastructure.

The menu can be quite confusing, as many options are provided to the player. The Strategic Targeting Pool can be loaded with Land Units, Air Units, and Naval Units as launch platforms, as well as Land Launch, Air Launch, Naval Launch, Sub Launch, and Silo Launch missile types. This is where the Missile Silo becomes useful, as it is the only way to fire silo-based missiles from their silos. Players can select each unit or missile individually to transfer into the pool, or they may select the whole stack and assign them all into the pool at once. This allows for great flexibility in regards to the amount of nuclear weapons they wish to attack a nation with in one strike. The assigned missiles must be compatible with their assigned platforms to be fired, and silo-launched missiles will select targets only within their range from the silo.

Targeting options are quite basic in the Strategic Targeting Pool. In the bottom left of the menu, there is a drop-down box of regions, and when a region is clicked, each nation in that region is shown. Clicking on an individual nation selects that nation for a nuclear strike. You may select your own nation, but launching the attack with your nation selected will not fire missiles at your own facilities. There are also two options under the drop-down box, labelled "Enemies" and "Allies". Checking the "Enemies" box will also select all enemy regions of the player's nation for target. Checking the "Allies" box will select all allies of the targeted region for target. You may select both boxes.

At the bottom right of the menu, there is a large red button which, when hovered over with the cursor, displays different messages depending on the ability to launch a nuclear strike. "Can't Strategic Launch" is displayed if nuclear weapons are disabled at the start of the game or if a nation is not selected, and "Launch Strategic Attack" is displayed if a nation is selected and the player is allowed to launch a nuclear strike. If the button is allowed to be pressed, it will be displayed in full color. If the player cannot launch an attack, the button will be grayed out.

If the player pressed the red button and launches a nuclear strike, an alarm will be heard and an alert message will be sent to the player indicating that the country has launched a nuclear strike, and that the "Cold War has gone hot!", regardless of the time period the player is in. Thus, it is impossible to launch a nuclear strike in secret. Silo-based missiles will launch from their silos if within range, and platforms in the targeting pool will be deployed and will attempt to attack the target nations with a systematic nuclear strike. Units can be selected and their missiles can be re-targeted if they do not launch their missiles for some reason. Attacks which are unimpeded and are not redirected automatically select their targets, which are usually military installations, large cities, or hexes where large numbers of facilities are located.

If a missile launched reaches its target and is not intercepted, it detonates. Upon detonation, the player's screen flashes a bright white and a sound is played, indicating that a nuclear weapon has reached its target. Inspecting the hex will show a great deal of damage done to the facilities, and a large population decrease due to civilian casualties. By default, a marker will place itself on the impact site and, when inspected, shows the name of the hex, or the coordinates if the hex is unnamed. These markers can also be inspected under the Defense tab on the sidebar. If a facility is destroyed, it will be indicated by a marker on the capital of the region. If a city happens to be destroyed by bombardment, the city and all facilities will be removed from the map, the population will drop to zero or near-zero, and a marker will be placed on the hex, indicating that the city has been obliterated by enemy bombardment. These markers cannot be inspected via the sidebar, but can be cleared by clearing the "League of Nations" message tab.